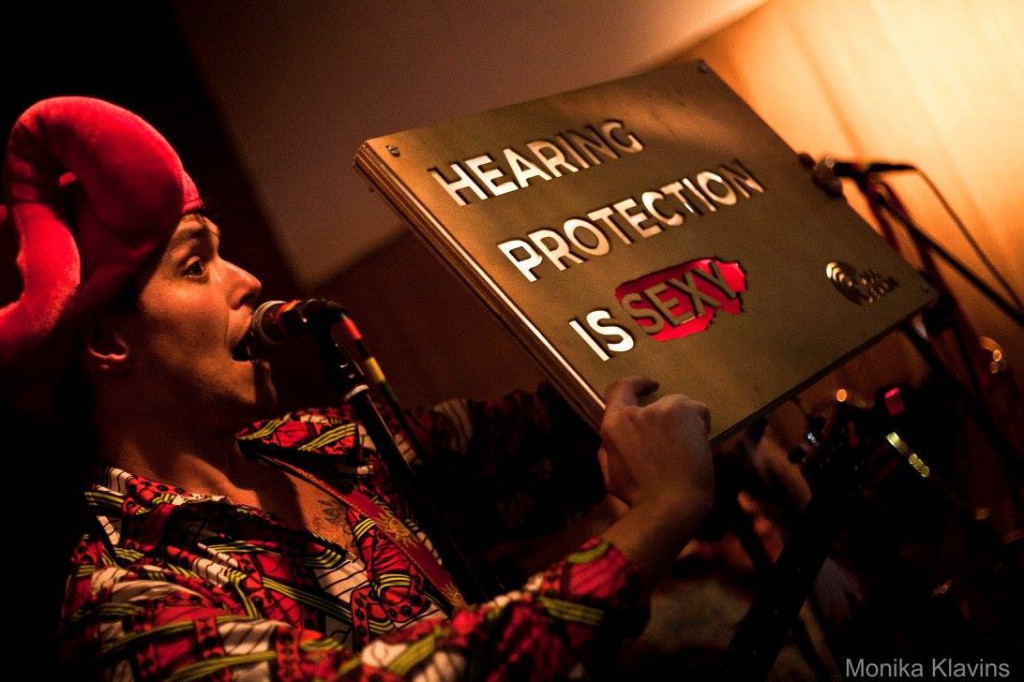 All Ears headed to the launch party for Sheffield  Mango Rescue Team’s first album Ritmos Calentitos on Friday night. We cornered their frontman ‘Alex Del Mango’ in the dingy storeroom of Hagglers Corner for this interview, amidst the debris of past events and with Isembard’s Wheel stomping over our heads. Here’s what went down…

(Alex is counting some money collected from the night from a large bucket). You play a lot for free. You’ve played countless fundraisers over the past couple of years, is this sustainable for you?

Right from the beginning with our first gig, Ashanti Beats, the objective was to play as many nice charity nights as we could, that way we could really make an impact on the communities of Sheffield with music. We’re lucky that we all have day jobs and can do this in our spare time. So for us that’s the base line, we’re a group of friends from Sharrow (Sheffield) who like to play gigs locally. We have fun together. If we can throw parties where we showcase our album and everyone is happy doing that, you know, it’s fine. Saying that, I don’t like to get screwed by festivals and promoters, if it’s a for-profit event we ask for the money we deserve. Of course it doesn’t allow to cover a 10 piece band’s salary but it generally covers the costs. For this album we’ve over spent £2000. On top of a lot of favours. So, at the moment, we’re trying to have fun while not losing money.

That’s commendable.  Often the pressure to make money can mean that musicians end up not being really involved in the communities local to them because they have to focus on commercial/corporate gigs.

We’re able to do what we want because we have a big fan base in Sheffield and don’t rely on getting paid for playing. Unless you have a huge album out that everyone is going crazy about you’re not going to be able to survive from playing music alone.

Well you do have your album out now, how’s that been?

I am proud of the work we’ve done, the album sounds really fresh. We’ve explored new tropical and psychedelic sounds augmenting the classic standard rock set with a lot of brass and afro-latin rhythms… not an easy thing to do to be fair. The most important thing is that by funding the album partly through crowdfunding, partly through our gigs we’ve kept our artistic independence. In other words we’ve done what we wanted to do without commercial or time pressure.  We know bands don’t normally have many chances of doing something special like an album so we wanted to get it right.

Also David O’Hagan and Brett Womersley, the producers, have done an amazing job as it is not always easy to deal with a 10 piece band. Everyone has an opinion and unfortunately we need to find a common ground that we can all be comfortable with… I say “unfortunately” but to me this is probably the most interesting part of the whole thing.

I think the track that people are gunna like most is… Very diplomatic Alex… are the kind of brassy ‘yeah!!!!’ tracks. These are the tracks that I’d put on in the morning when I wake up and I’m going to work. When I wanna listen to something that’s gunna shake me up if I’m having a bad time or I wanna get some happiness in my life. I think Loco, for example – the second track on the album – is quite an interesting one because it’s got a latin drums rhythm but you don’t notice it… you feel like you are listening to a normal rock track when your body is asking you to dance… it’s new and weird but again fresh. At the same time it’s got some really interesting psychedelic guitars, brass, keyboards, so I think we really pushed our sound here…This is something you have not listened to before… I think our fans will not like this track as much as they like the party happy tunes but to us it’s not really about pleasing people but taking them on an interesting journey with us. To give us all a bit of freedom… to challenge ourselves a bit. Challenge what is perceived as rock what is perceived as tropical music blah blah blah

From my perspective, Mango Rescue Team are such an integral part of the Sheffield music scene, how do you think the city has informed your music?

The city of Sheffield is everything the band is. When I first came to Sheffield, 6 years ago, I was amazed at the quality of bands that were playing around here. Mother Folkers, Hunter Gracchus, Flamingo Love Parade, Kill the Captain – all of the bands from different scenes who would play the Sharrow Lantern Carnival, Singing Knives and Audacious nights, Sharrow festival, all of that really intense mixed and diverse Sheffield Sharrow scene. When I got here and I landed into that; the independent parties, the Night Kitchen, Yellow Arches, I was fascinated by the fact that unlike big cities I’ve lived in before like London, Rio de Janeiro or Barcelona, here in Sheffield everyone knew each other. You’d be raving in a techno night with some guys you will find in a folk night the next day… and the same guys would be rocking a charity punk gig the next night… here everyone learns from everyone and that’s what creativity is about.. an intense meltdown of people from different backgrounds and scenes getting together and building shit together… for example I met Dave (our keyboard player) and Rob (our percussionist) from an African drumming collective we started. Mykey (our drummer) came from a jazz band. I met Hannah (who used to play from legendary hip hop brassy Sheffield band “Tentacles”) through other friends… who is behind us getting changed. (Hannah) Hiiiiii…  But I actually came to Sheffield to play some Punk music, I played in an Audacious Experiment type band, Maxillofacial Death Pyramid we called ourselves, I played bass for them. We are deffo all coming from different scenes and that is reflected in our sound.

So you’ve diverged a bit from then…

Yeah I was like a proper indie punk…I think we were quite good and the guys are still rocking they call themselves now Amorous Dialogues… you should check them out.

You describe yourself as ‘tropical’…

Yeah tropical, psychedelic, rock… I don’t like labels very much that’s why I try to confuse people by changing them all the time or using labels that don’t mean too much like “psychedelia” or “experimental” , “tropical” whatever whatever whatever. What I do genuinely like and am deeply fascinated about is music that is written with a certain “outsider’s perspective”. A bit of a sound-clash journey to somewhere you don’t really know – exploring sounds and rhythm that are not natural to you but fascinate you. For example, I love all the Tropicalista movement albums from Brazil… Caetano, Gal Costa, Os Mutantes etc all of that music was written pushing the boundaries of Brazilian music by exploring influences from the outside. The same with Bowie’s Berlin trilogy, Manu Chao’s Clandestino or the best psychedelic Beatles.  In our album Ritmos Calentitos we’ve tried to explore this “outsiders soundclash” concept by bringing a lot of sounds from Africa, Asia and Latin-America into our psychedelic rock party music. We bring all those sounds but we make it here in Sheffield, so we can’t really say we’re a tropical band.

The fact that you play with blow up palm trees and flamingos, would that have gone down differently in a hot, tropical country as opposed to a city like Sheffield where it’s practically Baltic? I remember a brilliant picture you posted about a year ago that was named ‘Tropical Sheffield’ and it had a picture of the old cooling towers and a palm tree. Is that contrast part of the appeal?

Hannah what do you think about this? The music does work in somewhere like Spain or Latin America.  Loads of Latin people love our music. But I don’t think we would have built this band in the same way if we were in a tropical country… Hanna what do you think?

Hannah (getting changed in the background): In Sheffield we’ve got bands like Renegade with big horn instruments and that sort of thing. As Alex said earlier people are making music from all different angles, K.O.G. and the Zongo Brigade, Banana Hill and Hot Diamond Aces to name a few. And then we’ve got all the Spanish and tropical influences, which reflect the people living in Sheffield.

Alex: I think Hannah’s right. I think our sound is unique to Sheffield, as I think it should be. Otherwise we would just be copying people from the outside and that’s just not too interesting to us.

What about the difference between playing in Sheffield, where you have such a strong support network and playing outside of your hometown, is is difficult to adapt?

Not at all, obviously Sheffield is very welcoming and we have a huge following. But we played our first gig in London at Hootanannys and it was sold out. I mean for the first five minutes people were like ‘hmmm okay, what is this’, they didn’t really know what it was all about – but after that they got into it and they partied. Leeds…very successful gigs we’ve done there. Everywhere we’ve played it’s been excellent.

Ritmos Calentitos is available in MP3 and CD from their Bandcamp. Order it here.

Note: Alex’s sexy Spanish-Sheffield twang has been ironed out, for ease of comprehension.