There’s something special about this place. Photo credit: Carolina Faruolo

Shambala has built up quite a reputation over the last 15 years, this year with a promise of live music, slam poetry, puppet shows, African drumming, roller discos and an intriguing workshop called Sunday supplement cock drawing, we thought we should go on down and check it out.

Me and My Friends

I caused a lot of baffled looks, at Shambala, when I told people I was going to see Me and my Friends. People find it strange that you’re pointedly excluding them from the category of ‘friends’, and that you think it possible to visit yourself. To their relief Me and my Friends are, in fact, a band. 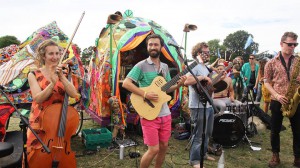 Me and My Friends. Photo credits The Jam Jar Collective

So a small herd of Sheffielders tripped their way across the lake to the healing fields for this seamless fusion of folk, reggae and afrobeat from their sister city Leeds. Take off your shoes, take off your socks and into the Koo Kou’s Nest stage, the rafters of which were weaved with foliage and giant origami birds. A psy-head who was with us made a U-turn when he saw that the crowd were all sitting cross legged – too fucking mellow for a Saturday night. Within a minute of our arrival though, Nick Rasley, guitarist and vocalist, had summoned everyone to their feet with just one swift hand gesture. No vocals needed. The tempo was stomping upwards along with the crowd. And we were locked in. Nick Rasley’s strumming and Sam Murray’s clarinet bouncing off the tent walls and Emma Coleman’s cello pulling us back to the stage.

It’s hard to compare them to anything but, to use a Sheffield framework, somewhere between Mango Rescue Team’s flamboyant ‘tropical’ reggae and Solana’s joyous gypsy-folk is where you’ll find Me and My Friends. And you’ll be seeing them at Haggler’s Corner soon, for sure. 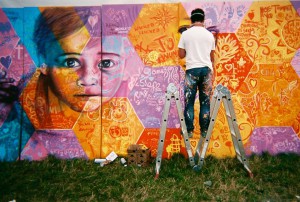 Gramatik gave a belting performance on the main stage at Shambala, taking the crowds through his disparate influences and styles in chronological order. Starting with his earlier jazzy trip-hop influenced beats from his various Street Bangerz albums, he filled the crowd with a vibrant and soulful energy. Brass and piano samples flaring alongside snappy snares kept the audience jiving away. Typical of Gramatik’s love for real instrumentation, a live performance feel was injected into the show with a trumpet player careering on stage and playing alongside the grooving beats. The set travelled subtly and seamlessly from these jazzy roots to much heavier bass driven melodies in a style reminiscent of Mr. Scruff. It was as if the crowd hadn’t noticed that they had been lured from their funky feet bopping to full blown fist pumping. This meant Gramatik’s later released dub-step influenced glitch ridden tunes had been fully released into the wilderness of the festival. ‘Fruity Friday’ had progressed into the night and Shambala’s suspect bearded ladies were pounding their way around their outdoor dance floor. Wobbles aplenty but still with that grooving style so characteristic of Gramatik.

It’s the Sunday Night, around 1am and Shambala Festival is now largely a dying beast. Glittery people are trudging in the rain, eating pizza and we are considering doing the same when we hear ‘Now there’s been enough of this hippe shit…’ and we run into the Rebel Soul Stage to find Spanner has taken the stage. Special brew cans aplenty; Spanner stir up the sweaty heaving mass with their militant punk’d up ska. The Bristol band play punk not for ‘entertaining “alternative” consumers or being part of the illusion of rebellion’ and songs such as ‘Punk as Fuck’ is a damning critique of the tough guys and fashion punx of the community. For Spanner the aim for tonight is to ‘strike fear into the hearts of capitalists, cops, bosses and politicians everywhere’ and they certainly find a receptive audience in the Rebel Soul crew. Danceable but with a spiky political message, the bouncing brass and skanking beats is just what’s needed as the festival grinds to a halt. ‘Autonomous Spaces’ sees a massive surge and in a split second someone from the crowd is up on stage joining in with their trombone and a tiny bit of festival magic happens. Much better than your, overpriced, stone baked pizza! 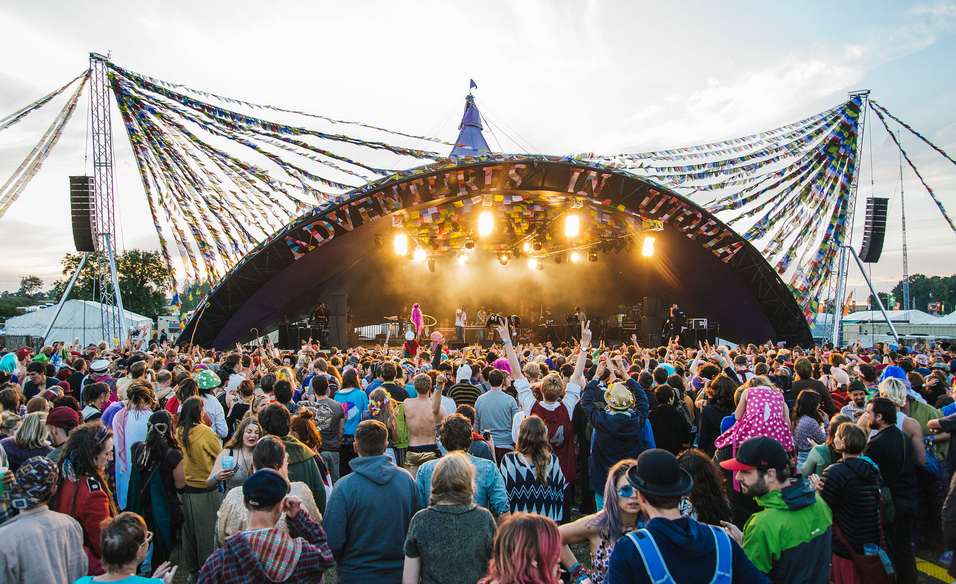 Waking up to that dismal sound of heavy rain…. Heart sinks. Tent becomes a submarine of safety. It’s all I have against the swamp of mud and abandoned packaging that I can feel creeping in through the outer layer…

Nightmares of being devoured by a rotting Special Brew box briefly flash through my mind. I hug myself tighter inside my sleeping bag.

Finally I’m up and awake, and it has to be said: the campsite does look pretty depressing from here. Green grass is starting to give way to a dark coloured sludge, my fellow festival-goers transform into hooded blurs. I look up for guidance: infinite greyness stares down.

Self-pitifully, I join the river of Shambalians and just let myself float – float past the toilets, the shops, the sexy-as-fuck girl in the bakery, friends painted blue with horns, distant disco boots, various plastic galaxies, pink hair, blue hair, swinging fur coats, police ravers all cascade past until I am washed up in the most perfect spot I could dream of. 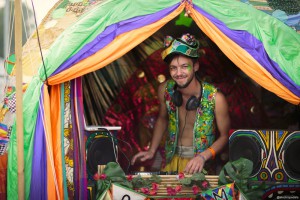 Welcome to Son Cameleon. Out of the mud rises a rig on peddles disguised as a giant, psychedelic chameleon; and she is beautiful – flaunting scales made from elegant tapestry, huge beaded eyes that turn into whirlpools of technicolour if you dare engage them in a stare! She has an awe about her, as she slowly traverses the landscape, drawing me in like forgotten cider oozing along behind her. Oozing but pumping at the same time – that kind of tentacle stomp that usually emerges at sunrise, when I’m mentally enlightened but physically, utterly wilted. Like the resurrection of a dead banana skin, perhaps.

It’s impossible to stop pumping away to her exotic beats; something vaguely euphoric house but with a tropical twist of drums and sax. Whatever it is, it’s incredible. It lights up the sky with energy and technicolour! I used to think reptiles were too zen, maybe even a bit psychotic in their cold stillness… but Mama Cameleon is a diva. The samba drums amongst the bass inject such absolute funk into her pedalled step: I never thought stumpy reptilian legs could pump so hard. I can’t help but let my human self fully succumb to this wobbly reptile world as I join her many chameleon offspring.