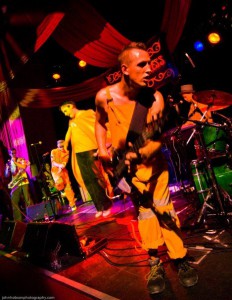 Those who have seen the music video for Bison’s song ‘Barry’s Bar’ will notice the resemblance between that dreary drinking institution and the Queen’s Social Club, where the band played on Saturday night. The décor screams staff Christmas party all year round, the hanging tinsel hasn’t twitched since the eighties and ‘the bar staff don’t laugh they just grimace’, as the song goes. Fond as I am of this stalwart venue, warts and all, one barman repeatedly refused to give me and my friends tap water. Not cool at all.

But anyway, rewind. Water was imperative because Bison’s brand of Ska induces a crowd resembling a bovine stampede – built like a brick shithouse and moving with no elegance whatsoever. Just how we like it. This is why white people like Ska so much, it’s so manic that you can just throw your limbs around in an ad hoc way with little regards for rhythm. Oh, aside from that die-hard guy who appears at the front of every local-music-gig in Sheffield incorporating Tai Chi into his dance moves. Queens on Saturday was no exception.

10+ of them were on stage, a self-described ‘orange monstrosity’ in construction worker uniforms and football strips howling: ‘You think that you are looking like a gangster, you’re not a gangster boy. I know your mum’. That, though, is the beauty of Bison: their total lack of pretention is symptomatic of their city and its inhabitants.